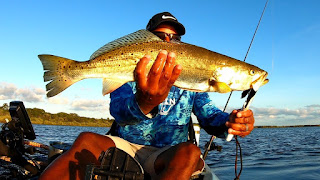 Gator Speckled Trout with the Catch 2000

Today’s Mavic Mini Kayak Fishing adventure was a BLAST! It stars a MirrOLure Catch 2000 and a blowup by one curiously aggressive gator speckled trout!

Now gator speckled trout are fun to catch, but when this one hit my MirrOLure Catch 2000 fishing lure, there was a BLOWUP like I’ve never heard nor seen before. He hit it like a freight train and turned to take it home. It was explosive! But don’t take my word for it. Let’s put the drone in the air, throw a line in the water, and see what we can catch!

Oh, and let me tell you a little more about today’s lure. I’ve owned this MirrOLure Catch 2000 for just under two months. I haven’t fished it a lot, but I’ve got to tell you, it delivers over slot fish! This is the third over slot fish I’ve landed with this lure! The first two were Redfish but this one was a gator speckled trout.