Catch Fish On Top, Or Not? – Has This Ever Happened To You? 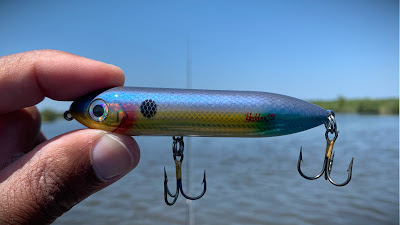 There’s nothing like catching fish on top water, right? But it’s not always the best time to fish topwater baits. So what do you do when you just want to put a fish in the boat? The answer is that to catch fish on top, you’ve got to know when to change it up. You see, the conditions dictate if and when you can catch fish on top or not. Join me as I put some fish in the boat this week by doing something I call fishing the conditions!

The opening scene was actually filmed on a separate day. Sometimes that happens. That day I didn’t catch any fish. But if at first you don’t suceed, try, try again. The next time I had to go out was a few days later, which was when the rest of this video was shot.

So, day two was much different. I left the boat ramp fairly early for me, but fairly late for top water. As you can see in the video, I did have a hit or two on the top water but no real takers. So, I switched things up. The current was flowing nicely into the bay when I landed that first redfish. I was happy with that catch. I took him home and had smoked redfish on the half shell the next day. In the video you see me land two flounder. However, I actually caught more fish than I showed in the video. 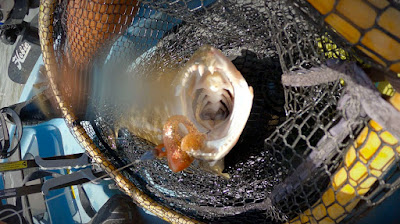 If you’re a Kayak Fishing Addict level member then you see two additional catches in the members only video. The first was a rat redfish, but the second was a 20″ flounder. It was awesome. I threw against the grass and made a jigging retrieve back to the kayak and I felt a bite but he didn’t take it. So, I flipped another cast into the same spot and it felt like I threw it directly into his mouth. The bite was immediate and I was happy to land that door mat. He went home with me and I had blackened flounder and rice a few hours later.

All in all it was a great day of kayak fishing across from Bing’s Landing in Palm Coast, Florida.

For you techies out there…I did it. After using Davinci Resolve (the free version) to produce my videos for the last two years, I finally upgraded to Davinci Resolve Studio (paid version). Right now there’s a special that gives you a free speed editor with the Studio license, or perhaps that’s a Studio license comes with the Speed Editor; either way it was time. The software is absolutely amazing. In case you didn’t know, it’s the software used to produce most of the TV shows and the movies we see. I’m still an amateur, but I thought I’d like to continue learning the craft and I would definitely love to speed up the process, so having the speed editor should help with that. So that’s two recent upgrades I’ve done. I now edit on an Apple M1 Mac Mini running the native (M1) version of Davinci Resolve Studio with a Speed Editor.

This is the first video with Davinci Resolve Studio and the Speed Editor. I started it off in the free version, but when the package arrived I upgraded and then finished 90%+ of this video.

If you’re interested in my eyewear, you can save 20% by clicking here and using code KFAHOBIE21 at checkout!

Oh, and my gear is here!